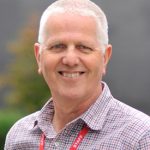 Transient expression of carboxysome shell proteins and Rubisco in rice protoplasts.
(Courtesy of Mike Page, Lancaster Environment Centre)
Food security is recognised as one of the major global challenges of the 21st century. Since rice is the most important human food, consumed by more than half of the world’s population, developing new highly-productive rice varieties will be fundamental to meeting some of the UN 2050 goals. Whilst substantial gains in rice yield have been obtained by traditional breeding, achievement of major increases in the future will require novel approaches. Improved photosynthesis has been identified as a major target for bioengineering for enhanced yield of C3 crop plants like rice and wheat. Improving photosynthetic efficiency does not simply increase the amount of carbohydrate produced per hectare of land, but it also increases the amount produced per unit of water and per unit of nitrogen. This means not only environmental sustainability, but also higher income and better food security for small farmers. We are introducing into rice a cyanobacterial carbon concentrating mechanism (CCM) to turbo charge photosynthesis. We used Golden Gate cloning to build multi-gene expression cassettes, enabling high-throughput testing of constructs in transient assays. The constructs that worked well in the transient system were then used in the stable transformation of rice.

View all posts by Deborah Taylor